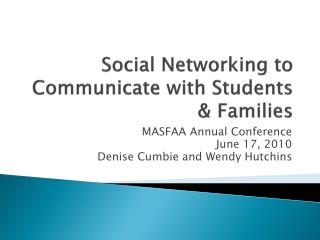 Social Networking to Communicate with Students & Families. MASFAA Annual Conference June 17, 2010 Denise Cumbie and Wendy Hutchins. What is Social Networking?. The grouping of individuals into specific groups to share first-hand information and experiences 5 Useful Websites for College & University Students - Facebook and twitter are not something new to you, yet there

How To Provide Meaningful Feedback to ESL Students - . university of alberta: edpy 413 by naomi, katie and angela.

How are Families Getting Along in Oklahoma? - . national association of social workers - oklahoma chapter 34 th annual

The Fundamentals of Social Networking - . vicki l. sauter february 9, 2012. what is a social networking service?. an

Basics Of Networking - . created by devendra kumar. what is a computer network?. a network is a collection of computers,

Communicating and Collaborating with Other Professionals and Families - . sped 518: survey of the exceptional learner

Multimedia Networking - . slides originally from williamson at calgary minor modifications are made notes derived from