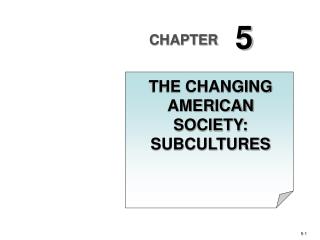 5. CHAPTER. THE CHANGING AMERICAN SOCIETY: SUBCULTURES. Consumer Behavior In The News…. If you worked in Wal-Mart’s meat department, how would you slice the meat for Hispanics versus the general population? Thicker Thinner The Same.