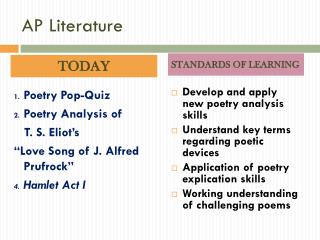 AP Literature - Standard: the ap literature student will make connections among observations which lead to inferences of

AP Literature and Composition - . a short introduction. free-write on the following:. “the illiterate of the 21 st

Your AP Literature Essay - . a strategy that works 60% of the time, every time --brian fantana. introduction paragraph.