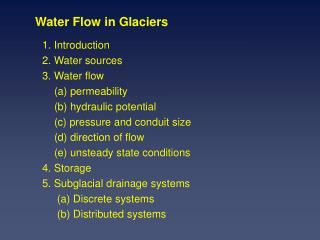 Glaciers and Melt water – Fluvioglacial environments - Objectives: to understand where melt water is in the glacial

Glaciers - . chapter 3 section 4. standards. s 6.2a surface water flow, glaciers, wind, and ocean waves have all been and

Glaciers - . january 21, 2011. glaciers. glaciers act as agents of erosion and deposition to help to create unique

GLACIERS - . the ddteam (daniela and daniel). dyn-climate var &amp; climate chg. 1/10 of the earth‘s surface is

GLACIERS - . a glacier is: any large mass of ice that moves slowly over land. two kinds of glaciers. valley glacier – a

Glaciers - . glaciers are piles of snow that flow under their own weight. they are capable of enormous erosion and

Glaciers - . chapter 17 holt. 1 glaciers: moving ice 1. a glacier is a large mass of moving ice formed by the compaction

GLACIERS - . chapter 5 honors earth science. what is a glacier?. a thick mass of moving ice.

Glaciers - . quiz. percentage of earth’s surface covered by glaciers today. 10%. but, much more extensive in the

Glaciers - . rivers of ice. glacier facts. found on every continent- even africa! cover 10% of the earth’s land area

GLACIERS - . chapter 5 honors earth science. what is a glacier?. a thick mass of moving ice.

Glaciers - . dr. r. b. schultz. glaciers glacier -- mass of ice formed by the recrystallization of snow under its own