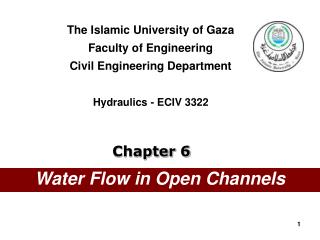 The Islamic University of Gaza Faculty of Engineering Civil Engineering Department Hydraulics - ECIV 3322. Chapter 6. Water Flow in Open Channels. 1. Introduction. An open channel is a duct in which the liquid flows with a free surface . Chapter 12 FLOW IN OPEN CHANNELS - . a broad coverage of topics in open-channel flow has been selected for this

Chapter 3: Steady uniform flow in open channels - . learning outcomes. by the end of this lesson, students should be able