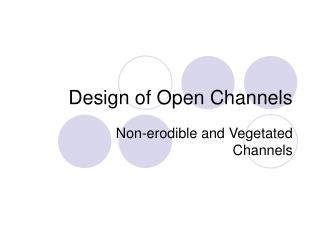 Design of Open Channels. Non-erodible and Vegetated Channels. Nonerodible Channels. Solve using Manning’s equation. Main consideration in design is to ensure adequate capacity. Typically done by adding a freeboard or extra depth to the channel as a safety measure. Chapter 12 FLOW IN OPEN CHANNELS - . a broad coverage of topics in open-channel flow has been selected for this

DESIGN OF ERODIBLE AND NON-ERODIBLE CHANNELS - . according to kennedy the critical velocity ratio vc in a channel may be