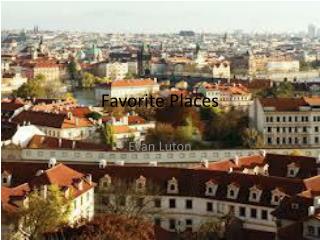 Favorite Places. Evan Luton. Clearwater, Florida. Clearwater started to gain reputation as a resort community in the 1890s Near Tampa H ighest coastal bluff in Florida Clearwater Marina is one of the best-equipped and most versatile marinas in Florida . Key West. My favorite places - . grand-place in brussels is one of the most beautiful square in the world. olomouc zoo is my

My favorite places in Olomouc, René Doležel - . here i go jumping parcoure. my dog likes swiming in the river. in this

My 10 Favorite Adventures for in Huatulco- Places To Retire Mexico - Huatulco is very fledgling. up till 1980, it was

“THESE ARE A FEW OF MY FAVORITE PERSONS, PLACES AND THINGS…” - . introduction to common and proper nouns. a noun

MY FAVORITE - . philosophy. a man with one watch knows what time it is;. a man with two watches is never quite sure.

FAVORITE DRILLS - . winning spirit racing camps in your own po ol - sample format - create your own off menu. friday b

MY FAVORITE - . philosophy. (en sevdiğim felsefe). a man with one watch knows what time it is ; (tek saati olan saatin

My favorite - . by mayela gzz . my favorite color is the pink ,i love it for me is the best color. i think is a color