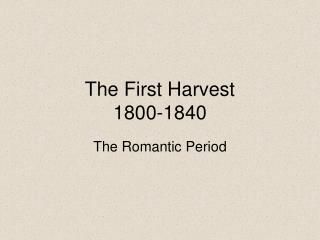 The First Harvest 1800-1840. The Romantic Period. Characteristics of Romantic Period. Interest in American past Emphasis on Nature Concentration on the inner world of human nature. Emergence of new spirit of Nationalism. The Market Revolution 1800-1840 - . a new economy. created by innovations in transportation and communication roads were

THE HARVEST - . by josh, patrick, and sebastian. plot summary. the plot of the story is where these young boys wonder

Exploring the Harvest - Goal : to identify and learn about the crop harvested using all our senses. objectives :

Harvest the Wind - . presented by: connie tebow lesson: courtesy of ag in the classroom. agenda. what is wind? aitc’s

The Last Harvest - . revelation 14. key message: “take your sickle and reap, because the time to reap has come, for the

The Election of 1840 - . northern democrats called &quot;loco-focos&quot;. whigs. ?what to do with texas?.