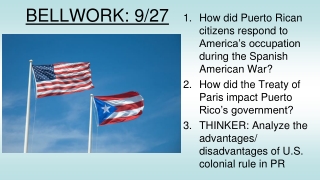 BELLWORK: 9/27. How did Puerto Rican citizens respond to America’s occupation during the Spanish American War? How did the Treaty of Paris impact Puerto Rico’s government? THINKER: Analyze the advantages/ disadvantages of U.S. colonial rule in PR. Puerto Rico.