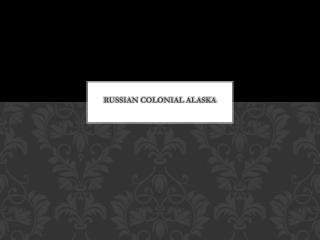 Russian Colonial Alaska. Russia 17 th Century . Tsar Peter the Great ruled Russia from 1689-1725 Russia spanned two continents, stretching from the Baltic Sea to the Pacific going east to west And the Arctic Ocean to the borders of India and China running north to South .

Alaska Purchase - . the united states and russia agreed on a sale price of 7.2 million dollars and alaska became an

Support for this work has been provided by - Ada gallen, athabascan elder from northway, alaska, pulling spruce roots for

Russian Old Believers of the Kenai Peninsula - . by kendra remsen. russians? but i thought we bought alaska from them 150

Chapter 17 - . lesson 3 expansion over seas. alaska . the russian government was selling alaska for 2 cents an acre

WHAT IS THE ALASKA PERMANENT FUND? - . a dedicated fund owned by the state of alaska 1976 – alaska oil pipeline

The Arctic ABC Book - . presented by class 3-8 west middle island elementary. a is for alaska. alaska has 17 of the