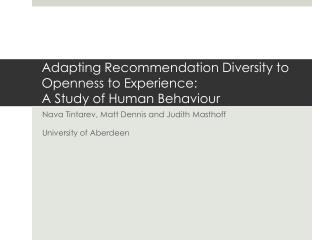 Herd Behaviour and Keeping up with the Joneses Andrew Oswald University of Warwick and IZA Bonn - . i would like to

Adapting and Accommodating for all Learners - . our objectives for today outcomes for today ~ everyone will expand their

Using Jade Behaviours - Primitive behaviours. simple behaviour: a basic class that can be extend in various ways and most

The Human Body – An Orientation - . anatomy – study of the structure and shape of the body and its parts physiology

Diversity Management - . objectives. to provide an understanding of diversity and diversity management principles.

Module 1: What am I adapting to? - . understanding the impacts of climate change in the great lakes. intro | climate |

S yntax - . structures of sentences. syntax is…. openness ordering words in sequences to express meanings for which no