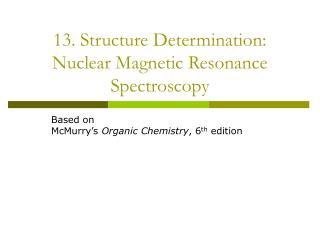 13. Structure Determination: Nuclear Magnetic Resonance Spectroscopy. Based on McMurry’s Organic Chemistry , 6 th edition. The Use of NMR Spectroscopy. Used to determine relative location of atoms within a molecule Most helpful spectroscopic technique in organic chemistry 13.7 Spin-Spin Splitting in NMR Spectroscopy - . not all peaks are singlets signals can be split by coupling of nuclear

ULTRAVIOLET-VISIBLE SPECTROSCOPY - . semester dec – apr 2010. in this lecture, you will learn:. molecular species that

Chapter 3 Crystal Geometry and Structure Determination - “there are two things to aim at in life: first, to get what

Chapter 28: Magnetic Induction - . section 28-1: magnetic flux. a square loop of sides a lies in the yz plane with one

13. Structure Determination: Nuclear Magnetic Resonance Spectroscopy - . why this chapter? . nmr is the most valuable