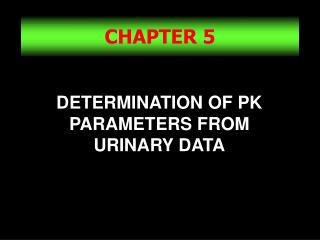 CHAPTER 5. DETERMINATION OF PK PARAMETERS FROM URINARY DATA. Calculation of k el from Urinary Excretion Data after I.V. Injection. k el can be calculated from urinary excretion data. The excretion rate of the drug is assumed to be first order.