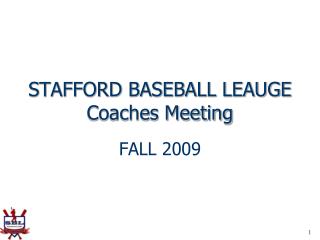 STAFFORD BASEBALL LEAUGE Coaches Meeting. FALL 2009. Introduction. Robert Dreistadt, President president@staffordbaseball.org W: 540-899-8800 C: 540-840-3252. Board of Directors. Head Injuries. DO NOT return a player to the game after a head injury when: Coaches Meeting - . asu u9-u19. schedule. review your schedule carefully before the season begins. no changes will be

Coaches’ Meeting - . we can take teachers as they come….. or we can make them better! observation and feedback part