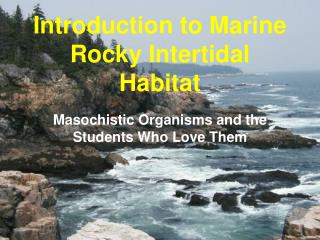 Introduction to Marine Rocky Intertidal Habitat. Masochistic Organisms and the Students Who Love Them. Physical Challenges. Inhabitants of the rocky intertidal habitat must deal with some of the most extreme envirnmental fluctuations on earth. These include: Wave action Substrate Slope

Index - . how to create an inspection request? how to login in the pele-marine app? how to fill the report? how to use

International Marine &amp; Offshore Engineering Conference - Sustainable use of the ocean: the role of marine

Introduction to Marine Ecosystems - . ocean ecosystem. an ecosystem is a level of organization that includes living

Life in the Ocean - . marine biology. the tremendous variety of marine organisms that inhabit the diverse oceanic

The Science of Marine Biology - . unit 1 intro video. what is marine biology. scientific study of organisms of the seas

how do plants adapt to their environment - Swiss cheese plant. habitat rainforest: wet and hot, with poor soil and

Case Study of the ArcGIS Marine Data Model: Examining Habitat Utilization Patterns of Reef Fish Along the West Coast of

General Introduction and Characterization of the Marine Brown Algae: Part I - . notes by naomi phillips arcadia