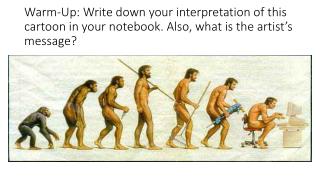 Warm-Up: Write down your interpretation of this cartoon in your notebook. Also, what is the artist’s message?. Today in World History. Aim  create a poem/story/song that identifies the changes/impacts of the Neolithic Revolution. Today in NZ History - . http://www.nzhistory.net.nz/timeline&amp;new_date=24/08. starter activity. you have three

Today in History: April 15 - . president lincoln issues a proclamation calling for 75,000 militiamen, and summoning a

Authors in World History - . who wrote the koran?. muhammad the prophet. what religion did muhammad found?. islam. name

Women in World History - . foundations through the present. early civilizations. gender roles were redefined with the

U.S. History Today - . outcomes: what was mccarthyism? the red scare? how did these affect america? hw : sec 3 ch

Islam in World History - . one of the markers, or historical turning points that defines the start of this new period

Foundations in World History - . who are we? how did we get here? where are we going?. welcome to day one!. objective: to

Money in the World Today - . katie tierney. money. is defined as “a medium that can be exchanged for goods and services

Challenges in Our World Today - . in this chapter you will learn about some of the important challenges facing the world