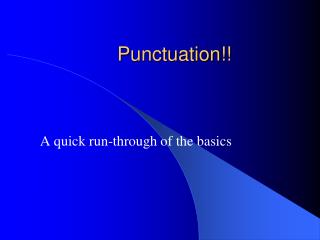 Punctuation!! . A quick run-through of the basics. The punctuation marks we will learn about today are …. The full stop (.) The comma (,) The colon (:) The semi-colon (;) The apostrophe (‘). English Unit 5 Test Review - . capitalization and punctuation. how would you fix the following sentences?. she is

Punctuation for College Writing: - . a cast of characters. goals. learn the names and functions of standard american

Punctuation - . welcome to gcse punctuation. don’t worry if you are not a gcse english student. this presentation is

Punctuation Saves Lives! - . the importance of punctuation. writing to learn. how do you define punctuation? what’s the