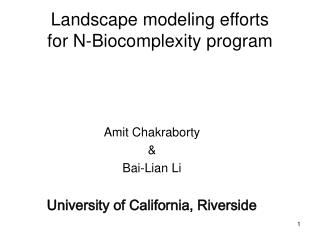 Landscape Program - In landscape style, color is made use of for aesthetic passion. colors need to be delicately weaved

Efforts in Water Quality Modeling by - . institutional strengthening to support environmental management of the kingston

Ecosystem modeling efforts at the NWFSC - . a quick overview. some basics. major efforts focused on salmon and their