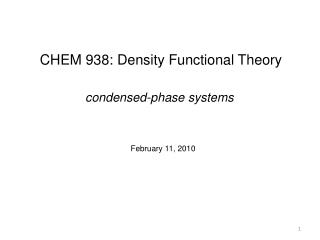 CHEM 938: Density Functional Theory. condensed-phase systems. February 11, 2010. Pseudopotentials. a huge number of planewaves are needed to describe core states, which have a very high curvature. consider the all-electron wavefunction (AE) in the plot. Functional Programming with Scheme - . introduction to functional programming concepts and the scheme language.

Alka Seltzer and density - . density of gas. lab. chem catalyst. you have seen the commercials, maybe used the product