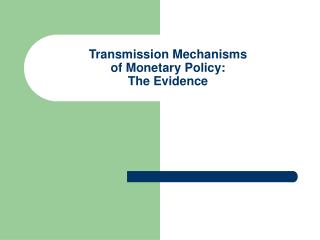 TRANSMISSION OF POWER - . what is a transmission system?. the rotational motion can be transmitted from one mechanical

Audit Evidence and Documentation - . overview. presentation will cover: the requirements for audit evidence nature of

DEFENSE MECHANISMS - . defense mechanisms. definition: a mental maneuver that one consciously or unconsciously chooses to