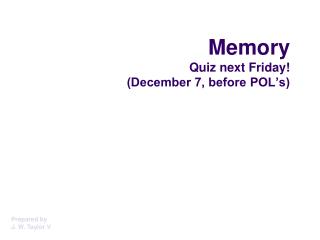 Cognition: Memory How Does your Memory Work 1 of 5 - BBC Horizon Documentary.flv - . unit overview. the phenomenon of

Memory Interfacing - . ece 511: digital system &amp; microprocessor. what we will learn in this session:. review

Memory interface - Memory is a device to store data to interfacing with memories, there must be: address bus, data bus

Memory - . cpu can only access content from main memory and registers (built into processor) data / instruction can not

Virtual Memory - . virtual memory --- when the combined size of the program, it’s data and stack exceed the amount of

Memory Management - . address binding. the normal procedures is to select one of the processes in the input queue and to

Electrostatics Chapter 23 - . week-1-2. what’s happening. clicker use will start on friday (maybe). today we begin the

Electrostatics Chapter 23 - . week-1-2. what’s happening. clicker use will start on friday (maybe). we will use them