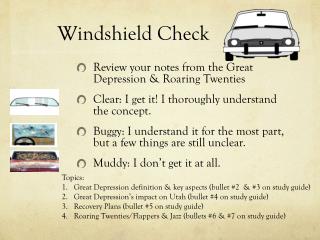 Windshield Check. Review your notes from the Great Depression & Roaring Twenties Clear: I get it! I thoroughly understand the concept. Buggy: I understand it for the most part, but a few things are still unclear. Muddy: I don’t get it at all. Topics: Windshield Geographers - . chase jones and brandon jones are. our goal:. to enlighten our fellow students and

Mobile Windshield Repair Atlanta | A Plus Windshield - A plus windshield helps to repair front window chips and cracks.

Windshield Replacement Melbourne - Specialists are fully qualified and knowledgeable. be assured our work is thoroughly

windshield for trucks - Significantly more, in a few crises, for example, if your auto is stolen, the gps frameworks for