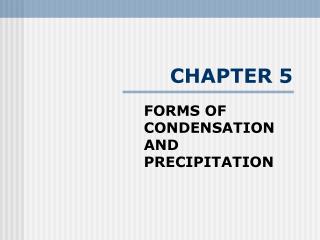 CHAPTER 5. FORMS OF CONDENSATION AND PRECIPITATION. Clouds. - Buoyant masses of visible droplets of H 2 O vapor or ice crystals - May be as low as the ground (fog), or as high as the Troposphere (ice clouds)