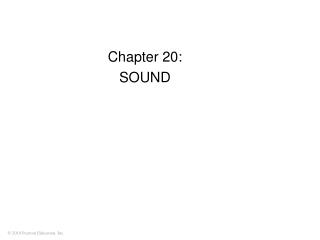 CHAPTER - 13 SOUND - . musical instruments. 1) sound :-. sound plays an important part in our daily lives. it helps us to

Ch 20 SOUND - . sound is a compression wave in an elastic medium. these can include solids, liquids and gases or a

Chapter 15 Sound - . 15.1 properties of sound. the production of sound waves always begin with a vibrating object. . this

Chapter 20 Sound - . the physicist usually takes the objective position and defines sound as a form of energy that

Chapter 12 Sound - . hr physics. sound. vibrations in matter. no one need be around to hear it. composed of compressions

Chapter 26 Sound - . sound all sounds are produced by the vibrations of material

Chapter 15 Sound - . quiz 15. chapter 15 sound. demonstrate knowledge of the nature of sound waves and the properties

CHAPTER 12: SOUND - . sound is a longitudinal wave. sound comes from a source, travels in a medium, as longitudinal