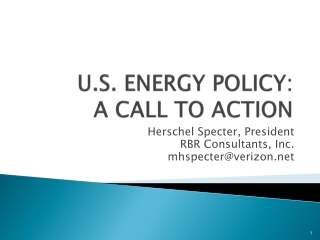 U.S. ENERGY POLICY: A CALL TO ACTION. Herschel Specter, President RBR Consultants, Inc. mhspecter@verizon.net. Seven Areas of Discussion. 1. The Problem 2. Oil and the Economy 3. Oil and the Environment 4. Multiple False Starts 5. This is Not Your Typical Recession