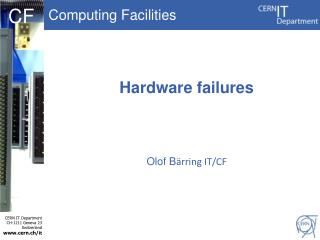 Hardware failures. Olof B ärring IT/CF. Outline. Failures What fails? How often? When? Repairs How? By who? By when? Conclusions. What fails? and how do we know?. The only things we know for sure about hardware are: It will fail Some of it fails more often than other… Hardware failures - . wayne salter on behalf of olof b ärring. outline. failures what fails? how often? when? repairs

BRAIN FAILURES!!! - . what season is it?. turning silhouettes https://www.youtube.com/watch?v=lq98xiyy9u4 apparent

Bank Failures - . banks take in deposits. bank reserves are the amount of deposits not loaned out by banks. a bank’s

Market Failures - . practice quiz. 1.) what is a market? 2.) list the 4 major types of market structures discussed in

Notable Failures - . history is full of examples. creative and imaginative people are often not recognized by their

Market Failures - . frederick university 2014. questions what and how much how for whom. problems efficiency in

MARKET FAILURES - . markets will achieve efficiency, but they won’t achieve equity! what else won’t they do?. focus :

Market Failures - . frederick university 2014. questions what and how much how for whom. problems efficiency in

HANDLING FAILURES - . warning. this is a first draft i welcome your corrections. one common objective. maintaining