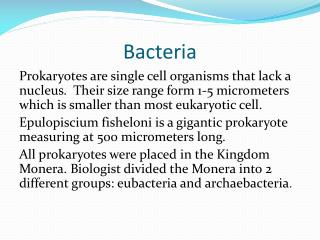 Bacteria. Prokaryotes are single cell organisms that lack a nucleus. Their size range form 1-5 micrometers which is smaller than most eukaryotic cell. Epulopiscium fisheloni is a gigantic prokaryote measuring at 500 micrometers long. Bacteria: - . classification and structure. what are the 6 kingdoms?. archaebacteria eubacteria protists fungi plants

Bacteria - . bacteria. prokaryotic eukaryotic can be both. prokaryotic! bacteria are the only prokaryotes on earth!.

Bacteria - . from bacteria to plants chapter 2.2 pages 56-66. discovery. believed to be one of the earliest forms of life

Bacteria - . bacteria. microscopic organisms that are prokaryotes make up two kingdoms of the classification system:

BACTERIA - . the oldest living structures on the earth. classification. living things can be grouped in three domains.