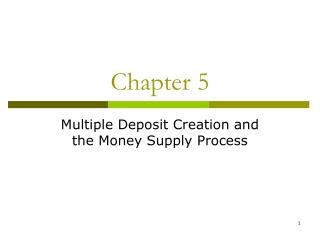 Chapter 15 - . money, banking, and central banking. introduction. during the financial meltdown and panic in 2008,

Presentation on SECURITY FEATURES OF ATM - About the atm:-an atm is an electronic device which allows a bank's customer

Creation/Evolution – What is the Controversy and Why Does It Matter? - . dr. heinz lycklama heinz@osta.com

Ch. 9: Money, the Price Level, and Inflation - . 9. definition of money and its functions economic functions of banks and

Chapter 5 - . the structure and function of macromolecules. overview: the molecules of life another level in the