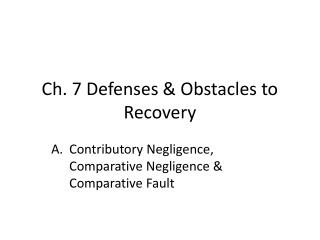 Ch. 7 - . groups, organizations, and institutions. groups. a key element of our social structure and much of our social

Defenses - . chapter 11 street law text pp. 126-132. beyond a reasonable doubt… there must be a conviction by the state

Defenses - . who’s job? . prosecution has burden of proof to show defendant is guilty defendant has the right to

Defenses Against Disease Ch. 43 - . from the tiniest things…. everyday we are invaded by bacteria, viruses, and

Obstacles to Development - . reasons why things do not get better. government. the decisions governments make

Defenses - . those who are accused are not required to present a defense. they can simply force the government to prove