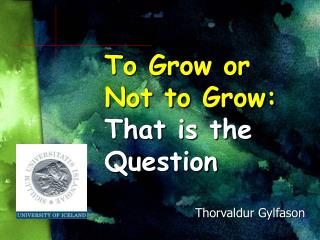 To Grow or Not to Grow: That is the Question. Thorvaldur Gylfason. Outline. Pictures of growth Determinants of growth Saving and investment Efficiency Liberalization Stabilization Privatization Diversification Empirical evidence of growth. Economic growth: pinto bean project - Introduction. research the factsthe part of a flowering plant from which a new plant will grow.

How Does Your Garden Grow? - . by mary hatfield-collison. planting the seeds. decide what you are going to grow. buy

What Kind of Lawyer do You Want to Be When You Grow Up? - . judge mary thornton house san gabriel valley bar association.

How plants grow - . created by miss castillo. can you think of what a plant might need in order to flourish and grow?.

Grow Up To Grow Out Series - . &quot;challenges for a growing congregation&quot;. sunday, november 14, 2010 jim

Germination - . the stage when seeds scatter from the parent plant and either lie on the ground and become dormant or

Which place will the grass grow best? - . purpose. the reason we are doing this project is because we want to see if

Let it Grow by Eric Clapton (1 of 2) - . standing at the crossroads, trying to read the signs to tell me which i should

Paul on Sanctification: Let’s Grow Up and Think - . vv1-5: five questions. who? attention-getting question how? main

Lesson 25 Day 2 - . question of the day. why do people grow plants? what are some different kind of plants you have

When I Grow Up (written by Allison Soncrant) - . when i grow up, i wonder what i’ll be. maybe, i’ll be a teacher and

An Egg Is an Egg Big Question: How do we change as we grow? - . author : nicki weiss genre: realistic fantasy. timer.

Have you ever grown any plants? If so, what did you do to grow them? - If not, what kind of plant would you like to

http://www.crazybulkmagic.com/max-grow-xtreme/ - After you have worked out it is important to eat some low-carb protein