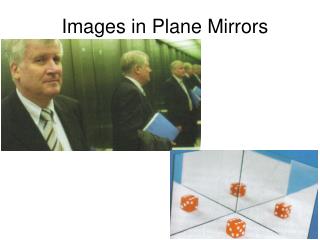 17-plane groups - . when the three symmetry elements, mirrors, rotation axis and glide planes are shown on the five nets,

Mirrors And Lenses - . chapter 23. introduction. images can be formed by plane or spherical mirrors and by lenses. ray

How are things transformed ? Changes and interactions - . unit iv – lesson 1 – images made by mirrors and lenses and

Images - . pinhole lens. photons from a source can be focused by a small aperture. aperture radius a magnification m

3.7. Magnification by plane mirrors - . a plane mirror generates a virtual image that occurs as far into the mirror as