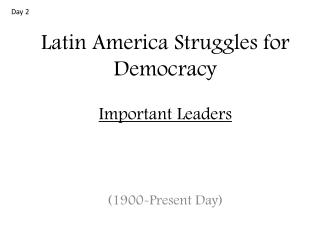 Chapter 29: Nationalism and Revolution Around the World - . section 1: struggle for change in latin america section 2:

US and Central America –Recent History

Struggle for Democracy in Mexico/Central America/Caribbean - . how does the us react to the rise of socialism in latin

Eva Peron - . her life, our inspiration by annie