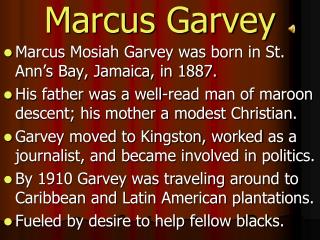 Marcus Garvey. Marcus Mosiah Garvey was born in St. Ann’s Bay, Jamaica, in 1887. His father was a well-read man of maroon descent; his mother a modest Christian. Garvey moved to Kingston, worked as a journalist, and became involved in politics.