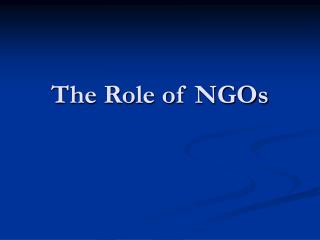 The Role of NGOs The Role of NGOs. In this Session. Learn how NGOs participate in the intergovernmental arena, including the negotiation of MEAs. Consider the value of NGO roles. Defining NGOs NGOs at the UN and in MEAs Defining Objectives: different NGO roles in negotiations.

The Role of NGOs

CAC, ICD-10 and the Changing Role of the Medical Coder - . agenda. introduction to computer-assisted coding the coding

Your Role as a Tutor - . &quot;as a volunteer instructor, i will continually strive to identify and meet the needs

Club President - . role, duties, and responsibilities. club president. ….. probably the best year you can have in lions

CAC, ICD-10 and the Changing Role of the Medical Coder - . agenda. introduction to computer-assisted coding the coding

Chapter 2: Role of Logistics in Supply Chains - . learning objectives after reading this chapter, you should be able to

The Role of Financial Intermediaries and Financial Markets - Reading: siklos: chapter 3 overview what do financial

Global Meeting of NGOs Advocating for Road Safety and Road Victims 7-8 May 2009 Brussels, Belgium - Introduction of