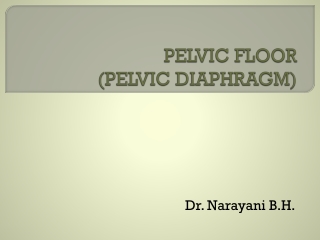 PELVIC FLOOR (PELVIC DIAPHRAGM). Dr. Narayani B.H. It is a muscular partition which separate the pelvic cavity from the anatomical perineum. It consists of 3 sets of muscle on either side – pubococcygeus , iliococcygeus and ischiococcygeus , these are collectively called levator ani . Learning Objectives Pelvic Walls and Floor - A. understand the position, attachments and major divisions of the pelvic

PELVIC FLOOR - . perineal body is essential for the integrity of the pelvic floor, particularly in females. levator ani-

PELVIC FLOOR MUSCLES - . niranja harshani bsc (physiotherapy). what is pelvic floor muscles. it is the sheath of the

Pelvic Floor Prolapse - . m l padwick md frcog. in the name of god. what is prolapse

POP – Pelvic Organ Prolapse - . general the vagina is a virtual space only. the vaginal axis is 45 degrees posterior,