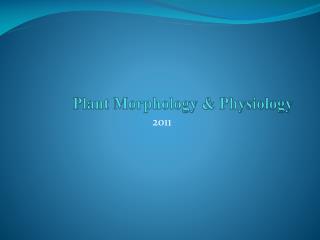 Plant Morphology & Physiology. 2011. Roots . Roots Morphology. Outline . Definition characteristics of a root Why are roots important? Contributors to Root Growth Parts of a Root Regions of Root Anatomy of the root Differences between dicot and monocot roots Types of roots

Plant Physiology - . assimilation and fixation of nitrogen. nitrogen in the environment. many biochemical compounds

Plant Physiology - . what happens inside the plant!. plant taxonomy. monocots dicots. the three areas we will look at. 1.

Plant Physiology - . water balance of plants. water in the soil. the water content and the rate of water movement in

Plant Tissues and Morphology - . a mature vascular plant (any plant other than mosses and liverworts), contains several