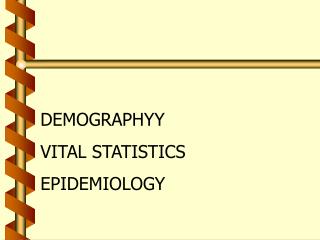 Introduction to Epidemiology Definitions and vital statistics - . definition. “the study of the distribution and

VITAL STATISTICS - . fajar awalia yulianto community research program1. there is no complete agreement for all

Vital Statistics of Populations - . vital statistics of populations. natural selection recognizes only one currency: even