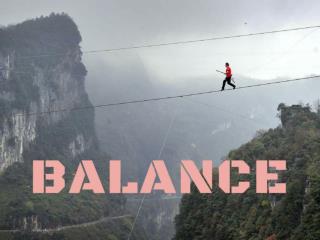 The ability to move or to remain in a position without losing control or falling. Balance - . what is game balance?. putting the pieces together! getting the numbers right some explicit, some implicit

Balance - . principles of design…. the designer works with the 4 tools or elements of design: line, form, color, and

BALANCE - Towards an ecosystem-based approach to management of the marine ecosystem - linking the wfd, hd and pmsd 1st

BALANCE - . a principle of design how symmetry and asymmetry can be used to obtain balance as a principle in design.

Balance - Controlling visual weight. balance. balance in design is the same as balance in real life, like a balance beam.

Balance - . robbie buchanan may 2007. balance. definition : the quality of a floral arrangement that gives a sense of

Balance - . sandra m schneider md. if you don’t know where you are going you won’t know when you get there.

BALANCE - . the way an artwork is arranged to make different parts seem equally important . balance is a principal of

BALANCE - . what is balance???. the ability to maintain equilibrium against force of gravity. two types…. static

Balance - . what is game balance?. getting the numbers right some explicit, some implicit all about relations between