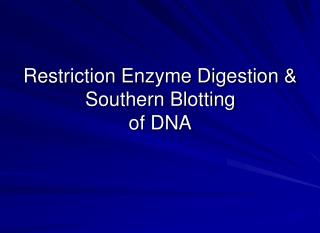 Enzyme Dialogue - . how to decipher the meaning of enzyme terms. enzyme activity. definition, meaning and measurement of

History/Background - . ‘southern’ hybridization named after sir edwin southern developed in 1975 one of the most

Restriction Enzymes Lecture - . 2014. what is a restriction enzyme?. an enzyme that cuts dna at a specific reaction site