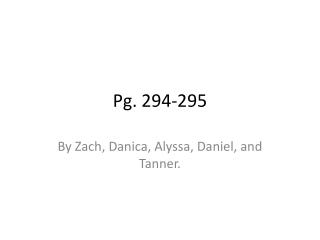 Pg. 294-295. By Zach, Danica, Alyssa, Daniel, and Tanner. Millennium Development Goals. In 2000, the United Nations and leaders of more than 150 countries held an assembly to work towards sustainable prosperity and development. These goals were to: 294 Welcome - . please be sure to sign in on the attendance sheet. introduction. welcome video what do you believe in?

IST 294 - 051 - . by john rouda. what we’re doing today. introductions me you guys qep presentation / discussion what i