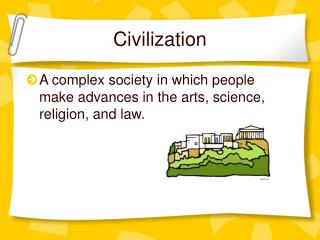 Civilization. A complex society in which people make advances in the arts, science, religion, and law. Irrigation. Using ditches and canals to bring water to a dry place. Cuneiform. Style of writing that used wedge shapes. ancient. Very old. Pharaoh. A king of ancient Egypt. pyramid. Civilization! - . the beginnings of history, 5000 years ago…. now, where were we…?. neolithic revolution led to

Civilization - . what is a civilization?. “the stage of human social development and organization that is considered

Civilization - Olmec. civilization. political. one main chieftain who had alliances with lesser chiefs chief in charge of

Civilization - . about 5,000 years ago something profound happened…. where were these ancient civilizations?. most are