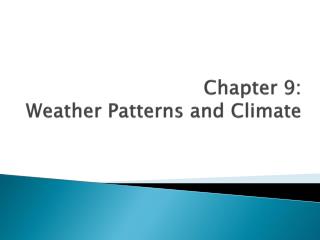 Chapter 9: Weather Patterns and Climate. Aim: How do air masses affect weather?. Air Masses. An air mass is a large region of the atmosphere where the air has similar properties throughout Gets its properties from the region it is from Are named for the region they come from Physical Science Basis of Climate Change : IPCC 2007 - . chapter 7: couplings between changes in the climate system and

Air, Weather, and Climate - . log in!. go to www.teachersdomain.org create a user profile login with your username and