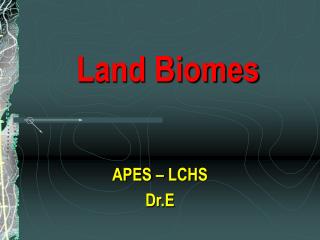 Land Biomes. APES – LCHS Dr.E. Introduction . Biomes are the major regional groupings of plants and animals discernible at a global scale distribution patterns are correlated with regional climate patterns and identified according to the climax vegetation type

Warm-up Activity - . put your address in the top right hand corner of your paper. be as specific as you can. now lets get

Biome - . a major regional terrestrial community with its own type of climate, vegetation, and animal life. biomes we