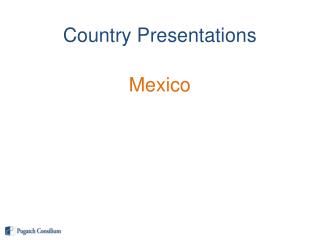 Country: Mexico - . -tips on how to do business in mexico -market and product trends -food export market activities and

Country Presentations: Methodology - . aims: to describe and share the situation in the country (needs, characteristics,

Guidelines for Country Presentations - . twg-lwr please prepare your presentation according to this template and provide

Guidelines for Country Presentations - . twg-hwr please prepare your presentation according to this template and provide

Mexico is a well positioned country - . clearly under mexico. equal or above mexico. below mexico, but

48 th Edition Partner country- Mexico - . what is it?. itb berlin: world’s leading travel trade show “it is the key