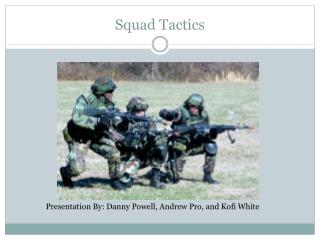 Squad Tactics - . an overview of current and potential techniques for squad based tactics in games. bryan auslander

Squad Tactics-Attack - . lesson objectives. following this lesson and completion of all assignments, cadets will be able

Geek Squad - We are dedicated to giving you proper service no matter where are you. you can contact us

SQUAD AMBUSH - . a surprise attack from a concealed position on a moving or temporarily halted target. categories of

Gamer Squad - . “habbo is a place to meet new and existing friends, play games and simply have fun. it is a richly

Tactics - . tactics (game plan) competitors hope to make the most of their own strengths whilst exploiting the weaknesses