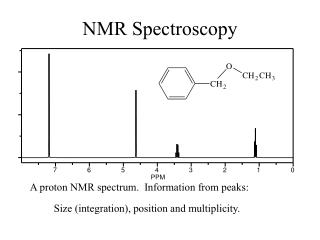 NMR Spectroscopy. A proton NMR spectrum. Information from peaks:. Size (integration), position and multiplicity. How does it work?. Nuclei behave as if they spin…. Nuclear spin is quantized and described by the quantum no. I, where I = 0, 1/2, 1, 3/2, 2, …. NMR SPECTROSCOPY - . introduction. nmr srectroscopy is the study of spin changes at the nuclear level when radio