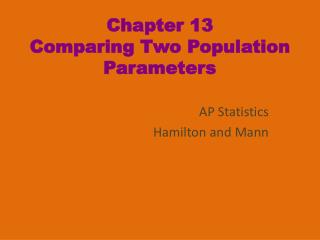 Chapter 13 Comparing Two Population Parameters. AP Statistics Hamilton and Mann. Lipitor or Pravachol. Which drug is more effective at lowering “bad cholesterol?” To figure this out, researchers designed a study they called PROVE-IT. Chapter 22: Comparing Two Proportions - . ap statistics. in this chapter, we take what we have learned and apply it to

Chapter 7 Comparing two means - Manipulating variables. another way to create a causal relation between independent and