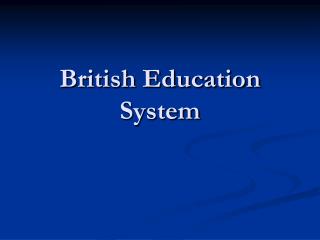 The British Education System - . tradition. as with other aspects of life in the uk, modern ways are making the education

UNDERSTANDING THE BRITISH EDUCATION SYSTEM - . our aim: every child matters. our key outcomes for children and young

BRITISH POLITICAL SYSTEM - . 1the history of british politics 2the governmental model 3 the branches of government

British Justice System - . i will: examine the various type of courts used within the british justice system. understand

British Political System - . what do you know already?. what countries do you see?. scotland. where is the uk?. northern

BRITISH POLITICAL SYSTEM - . 1the history of british politics 2the governmental model 3 the branches of government 4 the

American and British Education - . the united states of america. children start school when they are 6. 1-6 th