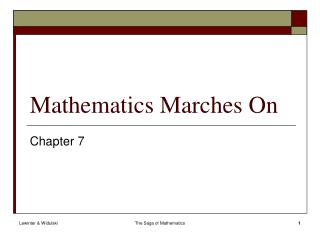 Death Marches - . of the holocaust. a view of the death march from dachau passing through villages in the direction of

Time Marches on Social Studies On Line - . blueprint skill. describe the order of events by using designation of time

Death Marches - . by: isa card. what dose death march mean?. a death march is a forced march of prisoners of war t he

Marches Access Point - . kington herefordshire england. what we do. a ccess to computers and the internet training

On Creating Mathematics: - . what arthur and blaise never knew. informal questions for mathematicians at parties:. what