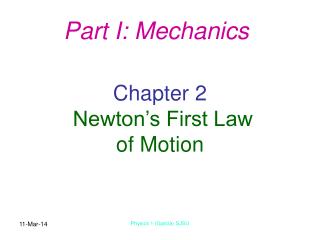 Part I: Mechanics. Chapter 2 Newton’s First Law of Motion . Aristotle & Galileo. Aristotle was great philosopher but not such a good scientist. Aristotle’s theory of motion is wrong. Took 2000 years before Galileo got motion right. Motion according to Aristotle (I).